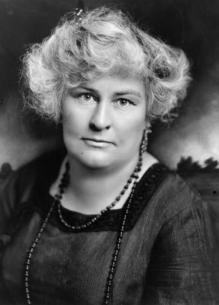 “The victory is won, the war is over and he lies dead in Belleau Wood.

In an article about the Washington Post’s move to new quarters, reporter Roxanne Roberts mentions Winifred Sweet Black Bonfils (aka Annie Laurie, 1863–1936), a pioneering Hearst reporter who also wrote about World War I.

The daughter of Union general Benjamin Jeffrey Sweet and a cousin of Texas Siftings editor Alexander Edwin Sweet, Black had a short-lived stint as an actress before joining the San Francisco Examiner. Her first work (under the pseudonym Annie Laurie) resembled Nellie Bly’s stunt journalism, with articles that resulted in health care reforms in San Francisco. The only woman to cover the devastating Galveston hurricane of 1900, she also reported on the San Francisco earthquake of 1906; child labor and juvenile justice issues; the leper colony at Molokai; and the trial of Harry Thaw, who was accused of killing architect Stanford White over “the girl in the red velvet swing” (Evelyn Nesbit).  A familiar columnist on women’s pages, she was one of eight U.S. female correspondents (including novelist Gertrude Atherton and muckraker Ida Tarbell) who covered the peace conference at Versailles. Despite health problems, she continued to write up to her death in 1936.

She married journalist Orlow Black in 1892 (divorced 1897; one son) and Charles Alden Bonfils, brother of the Denver Post publisher, in 1901 (two children).