Canadian-born musician Daisy May Pratt (1882–1925) married barber Louis Erd and had two children, Norma and Georgia. She enlisted in the Navy in April 1917 and rose to the rank of senior chief yeoman at the Boston Navy Yard, supervising the female workers, attending to welfare needs among the sailors, and establishing the Hingham Naval Training Station Band. She composed the following war-related songs, designating some of her royalties for Naval Relief:

• “We’ll Carry the Star-Spangled Banner through the Trenches” (1918). Listen to the song –  Sheet music

In March 1918, Erd received a gold medal for war service as a personal gesture of recognition by William R. Rush, commandant of the Boston Navy Yard. She was discharged from the Navy in April 1920 and was instrumental in establishing the first female American Legion post in Massachusetts. She supported the payment of a bonus to female veterans. She died of tuberculosis in 1925—a disease, the death certificate stated, that she had contracted during her military service. 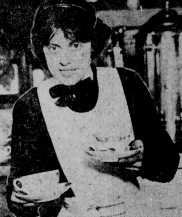 In September 1918, Editor & Publisher noted that Elizabeth Ingalls Burt (1889–1973), who had been a Boston Sunday Post reporter, had enlisted as a yeoman (F) and was editing The Salvo, the employee newspaper of the Boston Navy Yard. It stated that Burt was the first female newspaper reporter from Boston to serve in the Navy.

Born in Boston, Burt enlisted in May 1918. During her term as editor, many of The Salvo’s pieces ran without bylines, thus complicating the question of who wrote what. But Burt definitely wrote this July 1918 article.

It appears that, after the war, Burt was involved in public relations and became manager of the Handel and Hayden Society in Boston.

Boston-born Elizabeth Cabot Putnam (1888–1984), daughter of Harvard neurologist James Jackson Putnam, graduated from Radcliffe College in 1910 and left for Paris in May 1917.

Her wartime letters to her family, collected in On Duty and Off (1919), discuss her service with the American Ambulance Hospital in Paris (which cared for French soldiers), the AEF’s U.S. Air Service (the precursor to the Air Force), and the Red Cross. For the hospital, she largely worked on patients’ medical histories and leisure activities, and even assisted one patient in obtaining an artificial leg (an expensive proposition at the time). In September 1917, she moved to the Air Service’s production division (responsible, according to Putnam, for “the choosing and training of flyers as well as the decision on types of machines and equipment” [81]). She first was assigned to “Major G” (hints by Putnam point to Edgar S. Gorrell), whom she stated “swears a good deal in a casual, genial way” (83). She clearly enjoyed her job—”I feel every morning when I set forth as if I personally were going to lick the Germans,” she wrote (88)—and characterized it as “more E. Phillips Oppenheim-y every hour” (84, meaning spy-like). There were difficulties with the switchboard (“It is awfully hard to hear, especially names” [82]) and filing (“There are millions of papers that may be urgently needed at a moment’s notice and may be demanded under a million different guises. It is really a job” [100].) Putnam mentioned unannounced inspections by a strict General Pershing—”who left death and destruction in our unmilitary milieu” (102–03). Her sense of humor extended to air raids:

I am getting awfully tired of these air raids! . . . . We sat in our “salon” for an hour and made cocoa and then when two bombs were dropped that really sounded as if they were in our street (they weren’t), we went down to the cave where many of the others were. They say, however, that the second floor, where we are, is the very best place, for a bomb striking the top of the house does not usually get as low as that, and a bomb going off in the court or street doesn’t go as high. . . . It certainly gives you a queer feeling to sit conversing in front of the fire awaiting your own special bomb. (146–47)

In June 1918, she helped care for wounded Marines at a hospital in Neuilly after the Chateau Thierry campaign and made some grim observations:

Saturday night turned into Sunday morning with the stream absolutely steady—three or four operations all the time. When at about half-past three in the morning someone drew the curtain and opened the window on a marvellous deep violet-blue sky with the trees coal black against it and a fresh breeze, it was more than one could bear with equanimity—so heavenly outside and so horrible inside—all the blood and the hacked-up flesh, and the thought of how each one is going to suffer when he gets out of ether. (184)

Putnam then was assigned to Base Hospital 24 (aka the Tulane Unit) in Limoges. She became a Red Cross searcher, which involved searching for missing servicemen, interviewing the missing’s fellow soldiers, and writing to families with missing loved ones. She wrote enthusiastically, “The ‘searching’ is quite exciting. The first day I came upon a murder and a desertion!” (188).  She also visited with the wounded and facilitated refugee matters.

She sailed for home in September 1918 and returned to the Air Service in late 1918. In 1922, she worked as a secretary to the dean of Harvard Medical School. She married physician Monroe Anderson McIver in 1923; they later had two children, Elizabeth and Marian, and lived in the Cooperstown, NY, area.