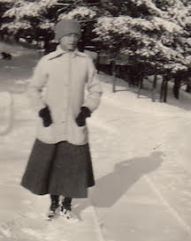 Artist Martha Putnam (1893–1983), the daughter of Boston physician Charles Pickering Putnam and cousin of fellow war worker Elizabeth Cabot Putnam (see blog post), was a reconstruction aide in physiotherapy at U.S. Army Base Hospitals Nos. 6 and 208 in Talance (near Bordeaux) from October 1918 to June 1919. In this January 1919 account from The Overseas War Record of the Winsor School, 1914–1919, she describes Christmas 1918 at Base Hospital No. 6.

On Monday every one began decorating. Lt. [James M.] Davis of the decorating committee had brought in great piles of greens to be distributed; we also had oblong lanterns over the electric lights, made by the carpenter and covered by the patients. Our ward looked like a forest, even the Balkan frames entwined with holly. The contribution of Miss [Helen] Buckmaster, occupational aid, and myself was a “Merry Christmas” printed in red, and a three-foot paper Santa Claus to hang on the little pine Christmas tree.

On the afternoon of Christmas Eve the festivities began with the pageant inspired by that great man, Captain [Henry Chase] Marble, orthopedic surgeon. The pageant visited every ward and did its stunts in each. We in our ward scouted out to watch its progress and as it neared 31 we scuttled inside to receive it. We heard the merry music down the corridor. It was headed by Father Christmas kneeling grandly in a wheel chair turned back-side front and draped like a chariot, drawn by a real donkey. Behind him pressed a motley little throng—the orchestra, variously robed; the quartet, the violinist, the “trained ducks,” the dancing cooties [lice], then a few people all dressed up for show. We were honored with a piece from the orchestra, then the quartet, then the cooties who rushed about after their dance to find a juicy patient—the men adored it. The Doctor Marble, like a French cook, served it all to us, and we were left breathless and happy.

That evening there was a tree and an entertainment (of recitation and music) at the Red Cross hut, for the walking patients. The Red Cross did handsomely. Each man received a pair of socks full of delicious things; each nurse a nice bag, with a pretty handkerchief and goodies. I felt as much tickled as though there weren’t thousands of other presents just like mine.

Christmas morning Isabel [possibly nurse Isabelle Dewar of Boston] and I rose at five to sing Christmas carols in the corridors between various wards. then breakfast at seven and on duty till church. Then I visited Thurk, sick in ward 16, then a large Christmas dinner. Worked till 4 in the wards, then spent the late afternoon in visiting my special pets in the other wards where I have worked as a nurse, and ending with two dentists who while I was there came in awfully shot up. They were all recovering and really glad to see me. After supper rushed over to the Red Cross hut to help Miss Delahanty [possibly artist Frances Washington Delehanty], O.P.  aid, make up the cast[] for “Spreading the News.” So that was the end of Christmas Day… (79–80)

Base Hospital No. 6, initially composed of 252 staff members from Massachusetts General Hospital, cared for 24,112 patients with 434 deaths of surgical cases (according to MGH Hotline). It later was combined with Hospital No. 208, which had personnel from Charlotte, NC.