On November 13 at 7 pm at the Lyceum in Alexandria, I’ll be speaking on “‘The Glorious Undying Spirit of Pluck’: Alexandria Women in World War I.” I also will be signing copies of my book In Their Own Words: American Women in World War I (sold by Alexandria’s bookstore Hooray for Books). Tickets are $10 (including wine/dessert reception), available here.

You now can see the short film produced by the American Medical Women’s Association, At Home and Over There: American Women Physicians in World War I.  It discusses the service of AMWA members in the war.

Members of the American Women’s Hospitals prepare to operate on a soldier, France, 1918. National Archives. 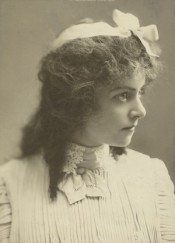 In 1903, actress Beatrice Ashley (1880–1946) married her second husband, William Astor Chanler (1867–1934), who was a descendant of John Jacob Astor, an African explorer, and a congressman. She became a sculptor who crafted bas-reliefs in New York’s Hotel Vanderbilt at 34th St and Park Ave. She and her husband had two sons and amicably separated in 1909, and she visited him in France after his leg was amputated in 1913 due to an injury.

Chanler was active in World War I relief organizations, serving as president of the American Committee of the French Heroes Fund and a member of the executive committee of the National Allied Relief Committee. The French Heroes Fund assisted French wounded and their families, as well as purchased the childhood home of the Marquis de Lafayette to serve as a school for war orphans and refugee children, a medical facility for children, and a museum commemorating Franco-American friendship. She assisted in compiling the volume For France (1917) as a fundraiser for the organization, which featured a cover design by N. C. Wyeth; a foreword by Theodore Roosevelt; and contributions by writers and artists such as Gertrude Atherton, Frances Hodgson Burnett, Richard Harding Davis, Hamlin Garland, Charles Dana Gibson, Mary Roberts Rinehart, Alan Seeger, John Singer Sargent, Ida Tarbell, Carolyn Wells, and Owen Wister.

The National Allied Relief Committee sought to publicize the experiences of the Allied nations in war and coordinate fund-raising activities among U.S.-based relief organizations. According to this publication, the committee raised $1 million by June 1917.

Among the other relief organizations in which Chanler was involved were the Czecho-Slovak Relief League, the American Branch of the French Actors Fund (which assisted families of French theater personnel serving in the war), and the Russian War Relief Committee (which addressed the lack of food and medical supplies in Russia). She spent five months in France in 1917 and told the New York Times in June 1917:

As to the devastated regions that I visited, the awful waste and desolation is almost inconceivable. . . . I visited the ransacked regions of Pozieres and Bapaume, where there was nothing but charred trees to make a village site, and a level country made undulating by shellfire. We came across a place called the Cemetery of the Tanks. Here were the battered remains of ten tanks, their hulls looking like ships wrecked at sea.

Thousands of hand grenades, many of them unexploded, were lying all about us. (7)

For her work, Chanler was made a Chevalier of the Legion d’honneur. She led an unsuccessful effort to have September 6 (Lafayette’s birthday) declared as a U.S. national holiday and, according to Paris Days and London Nights, was on the Carmania in 1918 when it was threatened by a submarine. Chanler published Cleopatra’s Daughter: Queen of Mauritania (1934). During World War II, she was president of the Friends of Greece Inc., a Greek relief organization, and the Committee of Mercy Inc.; she also was an organizer of the British Civil Defense Emergency Fund.