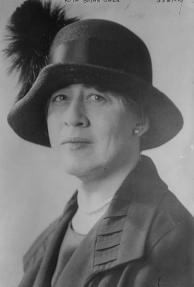 The audio has been posted from my appearance on the World War I Centennial News podcast, talking about some of the roles of the US women in the war. I’m on at about minute 37.15. There’s also information on an interesting documentary on the Hello Girls (the US switchboard operators who served in France) that will be part of several film festivals. As I am from New Jersey, I was happy to mention Flemington’s own Marjorie Hulsizer Copher. 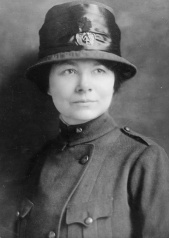 Update: Dennis Historical Society Archive links seem to be back up.

In the digital archive of Cape Cod’s Dennis Historical Society is correspondence from Minerva Evelyn Crowell (later Wexler, 1877–1966), a reconstruction aide with the AEF who served at Base Hospital 114 (Beau Desert, France)—”a camp in the rough,” as she wrote to her brother, Edwin, in July 1918. A 1901 Smith College graduate, she was active in the suffrage movement, participating in a 1912–13 march to Washington, DC, and the turbulent March 1913 suffrage parade that followed. She earned a physiotherapy credential from the Posse Gymnasium in Boston (a school founded by Swedish baron Nils Posse and his wife, Rose, that offered a progressive approach to physical education, prepared teachers and masseurs, and taught gymnastics to adults and children).

Crowell wrote to her mother in July 1918:

“We do most of our work early—starting before six, regular time, or eight as they reckon it. We have a free hour while the boys eat & after our own lunch we work for an hour or two. At first it seemed light but after a while find we need the afternoon to relax in. . . .Yesterday Miss MacDonald gave a birthday party to one of her boys. He has his leg hung up on pulleys as a shell drove his jacknife into his hip in 13 pieces. It is a double ward of 48 patients some bedridden & some hobble around. She made an immense cake & we made a quantity of fudge in the hospital kitchen. You see She can always get anything she wants anywhere. We made iced tea. The boys sang a little which was very touching. Then a few came in in wheelchairs to bring congratulations, & two friends ready for the Front came in to tell him goodbye. . . . Our unit serves to furnish a little entertainment, for the boys as well as treatment. I have the bone ward —broken legs etc. The girl who had it was the first one set to work & when she got sore throat she asked if I could take it for her. Now she is going away and I am to keep it. I like the work & it is all easy except hurting them & keeping all kinds of records. When we get to our own hospital next Fall we shall have books etc for it.”